Every track system is composed of a number of layers. The ballast bed of natural stones such as basalt, diabase or greywacke, plays an important role. 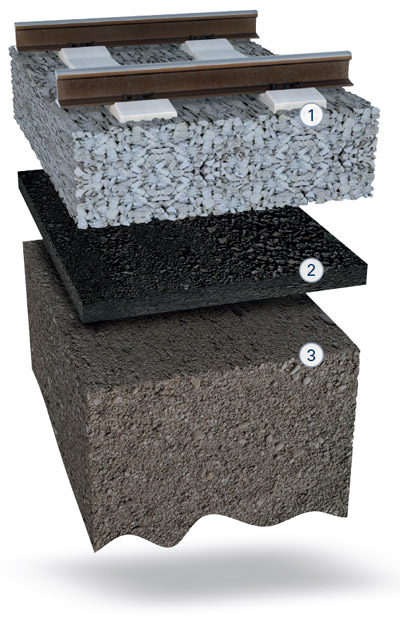 This is the system of tracks, sleepers, track fastenings and the so-called track bed, otherwise known as ballast. Most important of all is the form that the stones of ballast take. In order that the stones interlock with each other, they must have broken edges. This process of interlocking creates a foundation which is not only durable and resilient but which also provides cushioning and a stable support for the tracks and sleepers. The forces exerted by the weight of the trains travelling on the tracks above is absorbed and equally distributed over the subsurface. It is the size of the stones which control this process. The stones should measure between 31.5 mm and 63 mm. Any stones which are smaller than this risk being lifted and thrown by the air suction created by passing trains; larger stones cannot be fitted amongst the track construction.

The bearing layer is a mixture of gravel and sand and chunks of broken bedrock. This layer creates a sort of protective film between the ground and the ballast bed. This layer also helps to spread the weight exerted by trains on the rails above and also promotes the drainage of rain water.